Harrison was sitting in the lobby of Gold Not Silver Capital. He’d been dreading this meeting all week. Every moment spent explaining himself to investors was a moment he could spend changing the world. And why did they have to schedule it for a Friday afternoon? Don’t investors take Fridays off? Did Covid-19 shut all the country clubs down?

It’d been 18 months since the firm invested $1.5 million in Harrison’s startup. Cost him 20 percent of the company and a board seat, but at the time, he figured his options were limited. Plus, this wasn’t an idea a person sat on. Starting a company like BitRare required action and above-average courage.

As he waited to get called back, Harrison thought back to the moment the idea for BitRare came to him. He was visiting his grandparents in Orlando. To get away from their bickering, he took his wife and kids to SeaWorld. It’s fair to say that’s the day everything changed.

“Can I get you something to drink?” a masked receptionist asked.

The receptionist nodded and walked away.

Yes, he splurged on front row seats to SeaWorld’s killer whale show. And, yes, he bought the expensive ponchos that come in various colors. He wouldn’t humiliate his family by making them wear cheap ponchos. (Not that it’s anyone’s business, but Harrison chose a pink one to bring awareness to breast cancer.)

Watching those killer whales ascend from their prison tank to experience a brief moment of freedom touched Harrison’s heart. Although his body was soaking wet, his mind was on fire. What if there was a way to put endangered sea creatures on the blockchain?

The idea was simple: endangered sea creatures often end up in captivity, but what if Harrison could free them by creating a decentralized ledger that no government or corporation could control? If such a ledger did exist, and these rare sea beasts could exist on it, no one could ever imprison or murder them again.

Nowadays, they categorize startups like BitRare as a “Web3 Company.” No one knew what that was 18 months ago. And Harrison’s not the kind of guy to brag about creating a revolutionary new business category or internet ecosystem. He’s just a guy — a husband and father — who went to SeaWorld and happened to understand blockchain’s potential to make the world a better place.

“They’re ready to see you now,” said the receptionist.

Harrison got up from his seat and followed the receptionist to a nearby conference room named after Nikola Tesla. Once inside, Thomas and Matt, the founders of Gold Not Silver Capital, sat waiting on the other side of a large, custom-made oak table that could comfortably seat 20 people. The three Fiji water bottles placed on branded gold coasters made it clear everyone who was supposed to be in this meeting was present.

“Harrison!” said Thomas, standing up and reaching over the table to give Harrison a fist bump. “How the heck are you, my friend?”

“I’m hanging in there,” said Harrison, covering Thomas’s fist with his hand. “You know how it is—just grinding.”

“I know exactly what you mean,” Thomas said, laughing. “Please, have a seat.”

Harrison sat across from the two investors. Matt kept quiet. It was impossible not to notice he hadn’t stood up or made eye contact with Harrison since he walked into the room. It felt odd because Matt was gregarious and talkative. Harrison always looked forward to his conversations with Matt because he spoke in such a unique manner. He’d never met anyone who talked like him.

“We don’t want to take too much of your time,” said Thomas. “We just figured we’d bring you in face-to-face to see if the rumors are true.”

“Well, yeah, we heard BitRare experienced a breakthrough. We couldn’t wait until the next board meeting to find out.”

“Never mind who we heard it from, you watered-down corn dog,” said Matt, breaking his silence. “Is it true or not?”

Harrison was confused. Was “watered-down corn dog” an insult? It sure felt like it. At the very least, Matt’s tone was insulting.

“Listen,” interjected Thomas. “We just want to know if it’s true. Has BitRare figured out how to put endangered sea creatures on the blockchain?”

Now Harrison was sure Matt intended to insult. Where do these two get off questioning him like an ex-thief who happened to witness a robbery? He was the one in the arena, working 24/7 on a once-in-a-lifetime idea that, oh, I’m sorry, Harrison himself happened to come up with in the first place.

Of course, Harrison understood a leader stays calm in these situations.

“Well, gentlemen, I’m glad you asked,” said Harrison. “As you know, the blockchain has revolutionized ledgers and decentralized what was once centralized. So, yes, we have figured out a way to put endangered sea creatures — particularly killer whales — on the blockchain to better understand their movements, population size, mating patterns, and general welfare.”

“It’s an incredible breakthrough,” said Harrison. “However, we have yet to figure out how to physically put a sea creature on the blockchain. I’m confident we’re close, but the solution to that problem has eluded us so far.”

“Oh, I have no doubt you’ll figure it out,” said Thomas. “And once you do, no sea creature will ever be murdered or held captive again.”

Harrison and Thomas looked at Matt. It was impossible to know what he was thinking. Matt had the body of a long-retired NFL quarterback but possessed all the poise and patience of a professional poker player. And Harrison knew he didn’t bluff. The man’s intelligence and bank account made it clear that he always held pocket aces.

After moments of silence, Matt spoke. “Go ahead and grease my wheel! I didn’t think you could do it, but I’ll be darned if it doesn’t sound like you’re well on your way.”

Harrison and Thomas smiled at each other. Not only were they going to make a lot of money together, but they were also going to save endangered sea creatures — particularly killer whales — from murder and captivity.

It’s what this business was all about — capitalism with a heart.

“I’ll tell ya,” said Matt. “I’ve always thought the environmental market was more turvy than topsy, but you may prove me wrong yet. Wouldn’t that be something?”

Harrison stood up, shook both of their hands, and walked out of the conference room. He didn’t think that the meeting could’ve gone better. Once outside, Harrison figured he’d walk to his favorite coffee shop just a couple of blocks away.

Has anyone ever put corn dogs on the blockchain? Does watering them down make them better for the environment?

Harrison’s mind was on fire again. 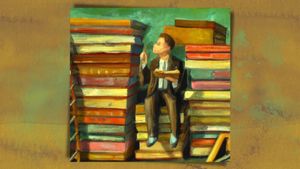